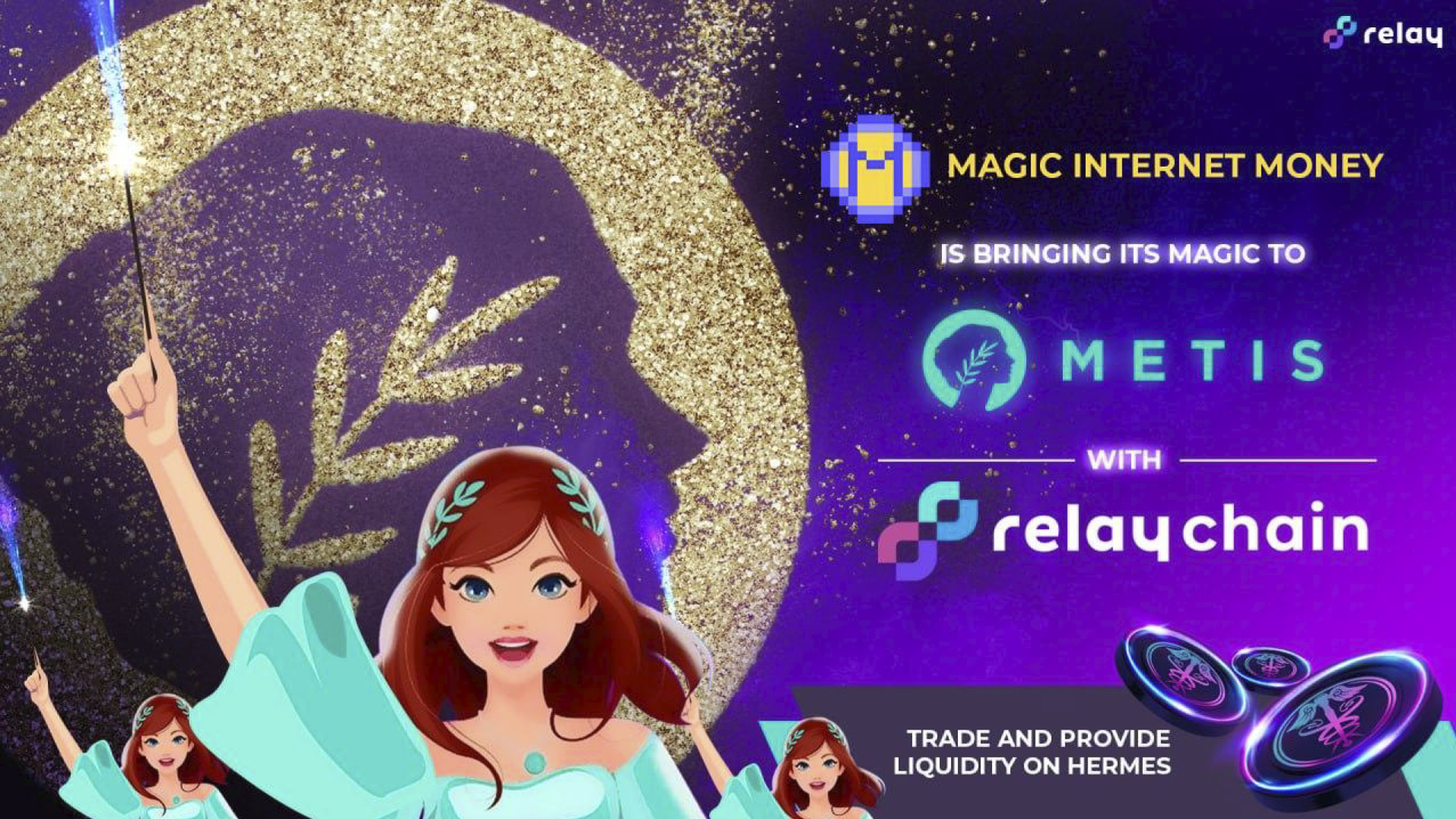 RelayChain partners with MaiaDao and Hermes to bring MIM to Metis Andromeda.
February 19, 2022

The teams at Hermes and RelayChain are excited to bring a new stablecoin option to Metis with Magic Internet Money, MIM. Users can now bridge MIM from the Fantom network to Metis Andromeda on app.RelayChain.com. The initial stable trading pair will be MIM-m.USDC on Hermes. Users are now able to add their own liquidity as well as trade. https://hermes.maiadao.xyz/#/swap

The utility of this pair is a major benefit as it allows users to enter Metis from another popular blockchain with a stablecoin. More origination chains for MIM will be added in the near future. MIM is the first offering from the Hermes-Realy partnership. Stay tuned for the next!

Hermes is a fork of Andre Cronje’s Solidly on the Metis Andromeda network. It was created by the MaiaDAO team. Hermes Protocol allows low cost, near 0 slippage trades on uncorrelated or tightly correlated assets. The protocol incentivizes fees instead of liquidity. Liquidity providers (LPs) are given incentives in the form of Hermes, the amount received is calculated as follows;

100% of weekly distribution weighted on votes from veHermes holders.
The above is distributed to the gauges, however LPs will earn between 40% and 100% based on their own veHermes balance.
LPs with 0 veHermes balance, will earn a maximum of 40%.

RelayChain enables fast, secure and low cost cross-chain token transfers between the worlds leading blockchains. The platform offers Bridging as a Service (BaaS) to partner networks and dApps wishing to expand their footprint beyond a single chain. RelayChain currently supports bridges between any combination of Metis, Moonbeam, Cronos, Harmony, MultiVAC, Moonriver, Metis, IoTeX, Ethereum, Polygon, Binance Smart Chain, Fantom, Avalanche, Shiden and HECO. Multiple popular networks will be added in the near future. A unique feature of RelayChain is that once a token exists on our platform, it can be bridged to any other EVM in our list of networks. This can be done in one step without need to return to the parent chain first. This represents a major feature of speed and convenience for all of the users. The RELAY token holds high utility as it will be used to reward stakers with a share of the native gas tokens collected from bridging fees. It’s a deflationary token; the more transactions that occur, the more RELAY is bought back and burned. RelayChain can quickly enable any project’s tokens to be bridged at no cost to the project.